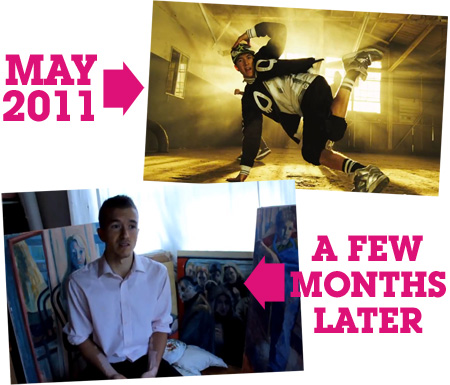 Big news from the world of 'Best Damn Night' hitmakers* Six D: the band's been dropped (we are not sure if this is exactly news) and Kieran has left the band.

A few weeks ago (but we only saw it yesterday) Kieran posted a really inter­est­ing video on YouTube — it's called 'Transitional times — Leaving Six D' — in which the over­styled 'street' stuff of this summer has been switched for a well ironed shirt and some gloomy art.

"Rather than making a Twitlonger, I thought I'd make a video," he says. That's right readers — sometimes news is just too big for a Twitlonger. In summary, there was an ankle injury that made him reflect on his life, but the band being dropped when Sony closed Jive probably made that decision a bit easier.  The video gives a short glimpse into how things very often end for pop groups, although not everyone seems to deal with things as well as Kieran.

Make sure you keep an eye out for his leaf/tree metaphor at about the 2:50 mark — it seems a bit ridicu­lous to start with then makes a lovely sort of sense.

The whole thing is quite touching really, although it would have been better if he'd followed "I'm going to get my black belt finally" with "…then go down Kensington High Street to see to some unfin­ished business".

Anyway Kieran seemed like a nice guy when we briefly met him earlier this year and it sounds like he's handling the whole pop-group-apo­ca­lypse thing pretty well, with some positive plans for the short and longterm future. Good luck Kieran!

* It was actually really good, not that The Record Buying Public noticed :(

Shake Tiger Shake — 'On The Run'

A Newsdump for 1 December 2011: From Adele's Grammy pack to Mariah and Justin bringing Xmas back