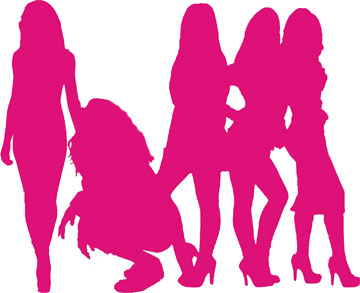 1. They're called The Saturdays.

2. They're off on tour with Girls Aloud in May. While on tour they will sing some songs, do some dancing and impress the concert-goers who aren't stuck in traffic / using the loo / pur­chas­ing reas­on­ably priced t‑shirts.

3. None of that 'DIY', 'new model' business for this lot: they're on Polydor, have been 'on the back burner' for a while  and will therefore have a lot of money thrown at them. This means nice haircuts, posh frocks  and maybe a pro­mo­tional frisbee or two.

4. For reasons '2' and '3' mentioned above there will be all sorts of 'OMG they're the new Girls Aloud' mut­ter­ings but musically their tracks com­ple­ment rather than compete with the Girls Aloud sound — The Saturdays' music sounds modern and fresh but at a point when pop music seems embar­rassed to be pop music and spends half its time trying to get into the NME it's refresh­ingly unself­con­scious. Basically The Saturdays are happy to be a pop group.

5. Their debut single, due in May, is called 'If This Is Love' and features (but isn't based around) a big (but not obvious) 80s sample.

6. You might recognise two of them, Frankie and Rochelle, from another band. The good news for pervs is that due to a few years having passed you are allowed to fancy them now. For the time being we will just refer to the five girls as Monday Saturday, Tuesday Saturday, Wednesday Saturday, Thursday Saturday  and Friday Saturday.

7. If one of them leaves and is replaced the new member will have to be known as Sunday Saturday and that is official.

9. If they ever do a Whigfield cover they will be banished from pop IMMEDIATELY.

10. We will show you what they look like when they have had some nice pho­to­graphs taken.