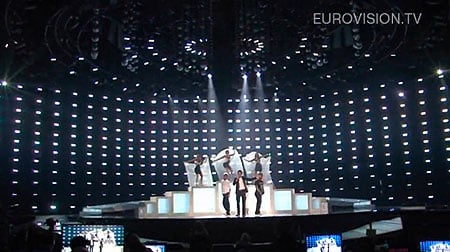 The Eurovision people have been posting some behind the scenes rehearsal footage which means you can watch UK entrant Josh Dubovie, an apology in human form, running through our so-bad-it's‑bad 2010 entry 'That Sounds Good To Me'.

[youtube]nRpGGs8fcsg[/youtube] If you're pushed for time skip straight to 3:28 for a glimpse of what Saturday night may have in store: a weak climax, the uncon­vin­cing grin of a man who's just shat his pants on live TV, and the sound of twelve people clapping.

Kylie's 'All The Lovers' in vidular form