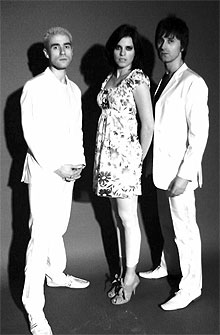 Zoot Woman are back next year with some new stuff.

The stuff in question is songs and we can exclus­ively reveal that these 'songs' will be collected together in 'an album' which will almost certainly be available to 'buy'*.

The first track to emerge from the new album is a massive electro monster called 'We Won't Break' and as well as being today's Song Of The Day it is also available to download — for free!!!!* — from spooky online record shop Rcrdlbl. This is the link for that.

Are you familiar with the work of Zoot Woman?

1. Zoot Woman are some brothers and a lady and Stuart Price. There wasn't always a lady — she is a fairly recent invention. Confusingly this arrival coincided with Stuart Price stopping appearing in pho­to­graphs, so to the untrained eye it just looks like Stuart has had a sex change.

2. Zoot Woman have released some amazing songs in the past called things like 'Living In A Magazine' and 'It's Automatic' and 'Grey Day'.

* This concept of 'buying music' harks back to a bygone era in which fans of music would literally 'spend money' to own an artist's work. This era predates the current climate in which it is perfectly accept­able to view all music as 'free' and the ownership of said music in exchange for zero pence as some sort of moral right.

** It is alright to download this for free rather than buy it because the people who invented the music have given us per­mis­sion, do you see etc.