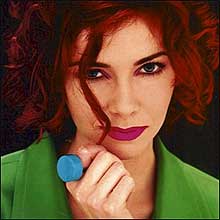 Here's something you may or may not have been expecting to read on a Friday morning in 2007: Cathy Dennis is back next year with a new album.

Music Week have the story and from that we can reveal (nick) the following:

» The artist name will be Sexcassettes.

» There will be an album and live performances.

» She's been co-writing and producing with Dr Luke, Greg Kurstin and Mark Ronson. That's the sort of list of col­lab­or­at­ors you'd usually expect to feature '…and Cathy Dennis', although in this case Cathy Dennis actually IS Cathy Dennis, which is both confusing and straightforward.

» Notes Cathy: “I
had an idea of starting a project for me to record a few new songs
where I sing. Now it is turning into something more
than that, as I have an album’s worth of material to record and take on
tour.”

» There's no record label yet because Simon Fuller wants it to be an organic 'n' creative process (ie get the whole thing finished before a load of major label A&Rs start 'sticking their oars in'.)

» We hope this isn't going to be another Wigwam.

It's true that for every 'Toxic', 'Sweet Dreams My LA Ex' and 'Can't
Get You Out Of My Head' there's been a ropey S Club Juniors album
track, a dodgy A*Teens effort or a Gareth Gates fiasco, but we'd expect the quality control on this project to be fairly high.

'More of this please.'

They may now have a lady but they're all Zoot Woman