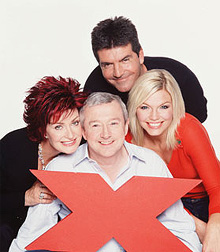 :: Poor old Kate Thornton and Louis Walsh — they have both been sacked from the next series of X‑Factor. Samantha Mumba or Paula Abdul 'might' be sat in Louis' chair for the next series, while Cat Deeley or Chris Moyles 'might' taking up the slack in Kate's old dresses.

:: Amy Winehouse cancelled a recent gig due to illness, although she'd been spotted buying booze. RED WINE CAN BE VERY MEDICINAL YOU KNOW.

:: Ray Quinn has been asked to sing some songs at Coleen McLoughlin's birthday party. Also, because he is from Liverpool he has been given a plaque on Liverpool's walk of fame. It is probably up there with Blu-Tak.

:: That thing about Kanye West ordering a curry from Newport was a load of old rubbish. The Welsh chef made it all up.

:: Bored of Britney yet? Well tough, she is still mental and has been wandering around swimming pools in her pants asking strangers to be her friends. Still, we've all done that.

:: Jo O'Meara reckons she tried to kill herself — even though she said last week that she def­in­itely didn't.

:: Apparently Beyonce felt unsexy when she had to get a bit skinny to do 'Dreamgirls'.

:: All Saints have been dropped by their label, it is official. That is what happens when you cross Cheryl Tweedycole.

:: Cheryl Tweedycole has offered Britney the chance to come and stay with her, promising she will sort her out in a month. Britney, love, come and stay at our house — we'll sort you out in a fortnight and you won't have to make polite con­ver­sa­tion with Ashley Cole.

:: Meanwhile, Kevin Federline has shaved his head. Apparently 'in support' of Britney, but excuse us if we are wrong, hasn't he had very short hair for ages now?

:: According to Christina Ricci, Justin Timberlake is actually a bit cruel and laughed at her once because she can't dance.

:: Simon Cowell reckons that Britney and Robbie are Doing Rehab for attention.

:: Girls Aloud are working with the Arctic Monkeys on a new song, if Sarah Harding is to be believed…

:: The Sun have started sup­port­ing the new Mel C single much like they did with Emma Bunton. Expect a piece about how much they hate her in about two weeks.

:: Ben Mills is happy not to have won X‑Factor. Just as well. He is probably happy that his record label have pulled his single at the last minute as well.

Have a good weekend!