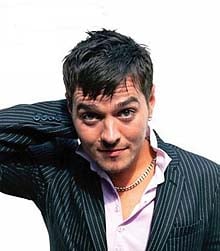 :: Matt Willis has been caught cheating at 'I'm A Celebrityâ?¦' Also, someone gave him some booze. His album is out this week by the way, not that you would have noticed.

:: Robbie Williams paid for dinner for every other diner in an indian res­taur­ant so that they would leave him to eat his dinner in peace. He will also have sex with a man if it means saving the life of a baby rabbit.

:: Paris Hilton decided to put on an impromptu PA at Jay‑Z's Las Vegas album launch. She mimed for a bit, threw up and fell off the stage. Lisa Scott-Lee take note — this is how you do a live show.

:: Lisa Scott-Lee has been confirmed for the next series of 'Dancing On Ice'. Hopefully she will be sick.

:: There is no Britney Spears sex tape. Boo!

:: But Britney is suddenly very good friends with Paris Hilton, so give her time etc.

And your parents love them