Icona Pop had a decent run at the top of the PJ Almighty, but now it is time to reassess who's been doing what in the sphere of popular song. And the new PJ Almighty looks like this: We were already quite excited about Katy Perry's forth­com­ing new album — it feels like the sort of big release that will rely more on the quality of the tunes than the clutter and noise that tends to surround some other major pop releases — but the sudden appear­ance of the 'Prism' funbus was a great move. Admittedly a MASSIVE GOLD TRUCK is a bit cluttery, but it's sim­ul­tan­eously audacious and enigmatic in the way most brilliant popstars tend to be. Let's just hope 'Prism' doesn't hint at the worst musical direction any major pop artiste could possibly take in the year 2013.

For many years there was only room for one Sophie in pop, but that double-surnamed Sophie is not making the most of this simple pop principle so we turn our atten­tions instead to a Sophie that comes without any surname at all. We heard Zane Lowe play Sophie's current song 'Bipp' on the radio last night but if we had been paying closer attention to Pitchfork (don't let these reference points put you off) and Dazed we might already have known that the song in question is a fant­ast­ic­ally fresh-sounding and lightly demented pop gem.

Sophie's website is quite funny and the vocal version of 'Nothing More To Say' is also worth a listen.

…is pretty great, but we think this and even his recent mixes for people like Beyoncé and Mikky Ekko only hint at what might be up his sleeve for the next twelve to eighteen months. On the strength of his recent output and the flashes of amaz­ing­ness in his older work [iTunes] we don't think pro­duc­tion work for big-name popstars is an unreas­on­able expect­a­tion, and if the A*M*E song leads to further col­lab­or­a­tions he'll have a pretty sharp artist album of his own by next summer.

It's the rare song­writer-turned-popstar whose own material achieves the com­mer­cial success of songs that have propelled other artists into the Top 10, and it's hard to predict whether Bonnie McKee's 'popstar persona' will hit the right note with the pop-buying public, but 'American Girl' remains a triumph and we're excited for the album.

"I was raised by the tele­vi­sion" is a good line isn't it. We can't figure out whether it's satire or cel­eb­ra­tion or both or neither. It's almost like what Marina was going for with the whole Electra Heart persona except mar­gin­ally more suc­cess­ful due to the fact that Bonnie is actually American.

…and there's an album due in October, so that's nice.

You're always on thin ice when cri­ti­cising the music-pur­chas­ing habits of The Public, but what sort of message does it really send out when an album as relent­lessly piss-poor as Jahmene's gets to Number One? Well, the message is this: "Please give us more shit. As much shit as we can take. Even when you think we can't take any more shit we'll keep on taking it. Bathe us in shit. Allow us to wallow in shit. Give us shit for breakfast, lunch and dinner. Pump shit at us while we sleep. WE LOVE SHIT." It's probably naive to think that if labels know that an album will sell regard­less of its content, at least one person involved in its creation might pipe up and go, "if we're going to the bother of making and marketing this album, how about we make some of half-decent". But it really wouldn't have hurt to give it a go. 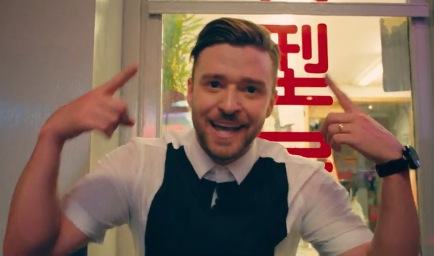 Justin Timberlake — 'Take Back The Night'