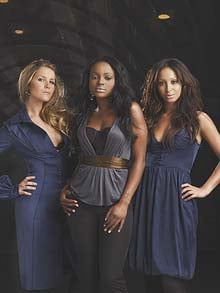 Number One: This is all going very well for the Sugababes. Two of them were very poorly last week (we diagnose 'disco flu') when we were due to interview them but we hope they are feeling better now.

Number Seven: Everyone loves a bit of trombone. Except Amy Winehouse, who wasn't at the 'Valerie' video shoot with Mark Ronson, meaning that lots of other women had to pretend to be Amy. It's all very confusing. Here is the video.

Number Eight: Feist's '1234' 'continues to climb', thanks to the iPod ad (boo) instead of the VanShe remix (hurrah).

Number 33: The power of Disney is unstop­pable, hence it hurling a pair of nutters like Aly & AJ into the pop charts.

That was the news.

It's going to have to be a yes from us

Judging the Kylie album by its cover