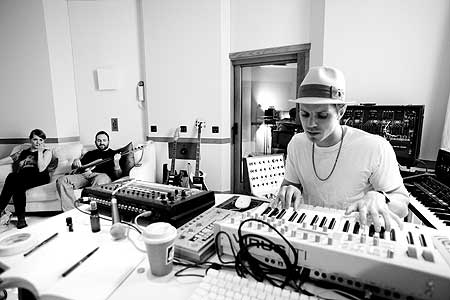 1. We had a chat about it last week with Jake Shears. Over the last eight months he's kept us in the loop, every now and again, on the album's progress, and now the album's pretty much in the bag so he can talk about it properly. The album has a title, but we're not allowed to tell you what it is or literally all Hell would break loose. (It's better than 'Ta-Dah'.)

2. The album's produced with Stuart Price, after Neil Tennant planted the idea in Jake's head. Notes Jake: "I called Babydaddy and just mentioned it in passing, like I was treading carefully with it…. And two weeks later Babydaddy and Stuart were in Berlin with me, and we went clubbing and had an amazing time, then started working a week later. It’s been heavenly. The three of us are going to get married! It’s kind of pathetic how much we love each other."

3. The album's out next year, in March, rather than getting it caught up in the whole Christmas bun fight.

4. The first single is likely to be "a really epic song that makes you feel really good and has a great feeling to it. The lyrics — it’s a very personal song — are about feeling like you’re sinking into a hole. It’s a song about climbing out of that hole. And being confident and knowing that you can go forth with all your guns blazing". Jake describes the period sur­round­ing the band's second album as being a bit like being in a hole. The likely first single, he says,  is "a very elevating song. It’ll give you goose­bumps. It actually makes me want to cry".

5. This is a 'night time' record — Jake describes it as "super­sexual and sleazy" and it's the result of a moment of clarity he exper­i­enced on a dance­floor in Germany. "I was at a sex party in Mannheim, I was on the dance­floor. It was six o’clock in the morning. I was wearing a little rubber wrestling singlet. I was having a great time. There was a cloud in the room, this cloud of man sweat, cigar­ettes, spilled booze, shit because people were getting fisted, and poppers. And piss! It was dis­gust­ing… The most vile place I’ve ever been. And I was dancing, and the DJs put on ‘Walk The Night’ by the Skatt Brothers. It’s one of my favour­ites. It was one of those rev­el­at­ory moments for me when I realised what I wanted the album to sound like and how I wanted it to make me feel."

6. Jake admits the last album was flawed but "just good enough". Lessons learned from that album have informed the way they approach the new one.

7. Here's the full tran­script of our chat/interview thing. It's a bit long-winded but a good read for fans, and gives a great feel for what the album will be like (without really giving much away at all — the new issue of Q has two song titles as 'Hollywood Wives' and 'Permanent Wave').

8. And that, as they say, is that. We're really excited about this album now.