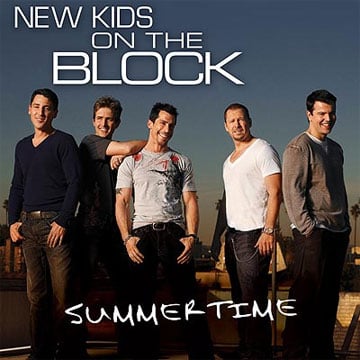 Paging pen­sion­ers! Paging pen­sion­ers! Your old favourite band, New Kids On The Block, are releasing their first new single in 800 years in one week. It's called 'Summertime' and it's basically a synthR&B rewrite of LFO's 'Summer Girls' nos­tal­ga­thon with the lost-love wist­ful­ness of 'Summer Nights'.

Click here to listen to a clip courtesy of People.com.

Starts off being far better than you might have expected, ends up being far worse than you could ever have feared.

Absolute shit. Let's have a look at LFO's 'Summer Girls' video instead.

"New Kids On The Block had a bunch of hits." Amazing.

EP of the year goes to Isabel Guzman