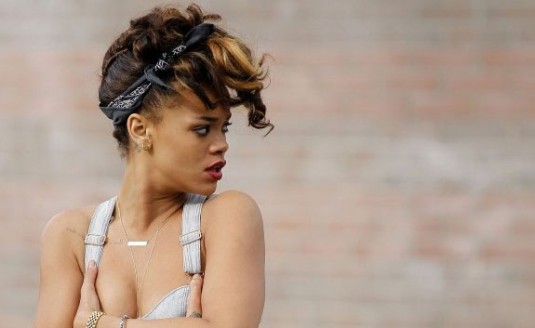 Do you want to know the thing we like about Rihanna's hit factory?

(We've been reminded of this because Owen Myers just tweeted a link to The New Yorker's brilliant Stargate feature from March, and also because of the way Cheryl talked about Rihanna's writing camps with a sort of wide-eyed amazement in our recent interview.)

Well here is the thing.

We love the idea of these high-pressure writing camps. We love the monkeys-with-type­writers approach to coming up with a Rihanna song. As we mentioned in the Cheryl interview, we loved it with Xenomania's similar approach to Girls Aloud songs as much as we do with the US writing camps coming up with Rihanna songs. We love all those  flashes of genius and the way they all fall in line with each other and end up creating a song, with several writers and producers, sometimes dozens, col­lab­or­at­ing to make an album. We love the idea that col­lab­or­a­tion is sometimes com­pet­i­tion. We don't mind that there are numerous writers and numerous producers on the credits for most of Rihanna's songs, because we love the way the songs sound.

But what we love most of all is that while those intensive writing camps continue to deliver the goods, Rihanna's biggest song of the last few years, a song that spent longer at Number One in America than 'Umbrella', topped the charts in 19 other countries, spawned countless imitators but still sounds unique and fresh a million listens later without ever sounding like it tried too hard to be anything other than brilliant, was written and produced by one man sitting around banging out songs by himself in between Pot Noodles.

Jessie J and Katy Perry are guaranteed to write an album