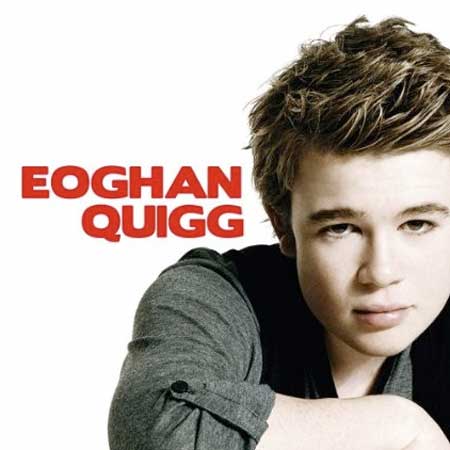 It might be a cliche that 'Thriller' is the best album ever, but in all ser­i­ous­ness what else are you going to choose?

Well, the worst album of all time has been less easy to identify but from this week onwards, decades into the future, Eoghan Quigg's album 'Eoghan Quigg' will be the one that scoops the accolade. It will take on a sense of legendary badness. Its badness will become a cliche, trotted out on terrible 'talking heads' TV shows. But, as with 'Thriller', what else will it be  possible for people to choose? 'Eoghan Quigg' is sort of the anti-'Thriller' — a record which manages to be as bad as Michael Jackson's opus is good.

Those of you who have not yet heard 'Eoghan Quigg' might rightly be thinking that this album was always going to be bad, and that it's unfair to single out this sort of album — quickly recorded in the wake of X Factor success — as being worse than any of the other X Factor, Pop Idol or Fame Academy albums.

Well you're right that this was always going to be a bad album, but only in Simon
Cowell's wildest night­mares was 'Eoghan Quigg' ever going to be quite as bad as the
reality unleashed on record stores this week. It's a badness that sometimes feels
as if it could tear a hole in the fabric of time
and space. What we will say is this: listen to the album. Then, and only then, will you be able to really under­stand how inter­galactic­ally bad 'Eoghan Quigg' really is. Imagine the three worst reality pop albums you have ever heard. Let's pick the Michelle McManus album, the David Sneddon album and the Journey South album. Imagine the combined badness of all those albums, then somehow imagine that ALL per­son­al­ity has been sucked out out. Then imagine that they kept on sucking, long after there all per­son­al­ity was gone, until there was a sort of per­son­al­ity prolapse. You are still only half way to under­stand­ing just how empty these record­ings are.

To clarify, it is not shit in the same way that some people (not us) might say that Same
Difference or Shayne Ward record­ings are shit. It is the sort of shit that even
the most delib­er­ately obtuse, most tra­gic­ally deluded and self-defensive
pro-pop evan­gel­ist would have to call shit. And it sounds cheap. So very, very cheap. 'Eoghan Quigg' — an album so ines­cap­ably awful that when coming to the title only the words 'eoghan' and 'quigg' were capable of sum­mar­ising its shod­di­ness — sounds like it will have recouped all recording costs after selling four copies. It is an album entirely without merit, recorded so cheaply and with
such little regard for the art of pop that the final product simply
does not count as music, and should not be included in the album chart. It is just as well that this album was not out in time for Mother's Day, because it would only have been a suitable Mother's Day present if your mother was Hitler.

Listen to the album in full at Spotify — here's the direct link — and tell us we're wrong.