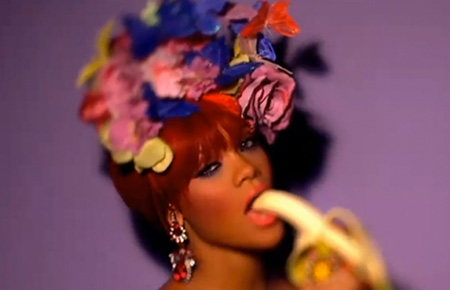 3. "Well Radio 1 cut out all the ref­er­ences to S&M and even changed the title to 'Come On'. It's political cor­rect­ness gone mad!"

4. "Surely all that has happened is that a song about sad­o­mas­ochism, a song designed not purely but at least partially to raise eyebrows has, true to its aim, raised eyebrows. What did you expect?"

6. "Yes well what Rihanna didn't say in her outraged tweet — perhaps because she didn't know anything about it which is a whole different issue — was that her label actually censored the song them­selves in order to get it on daytime radio then gave it to Radio 1, who'll continue to play the proper version during evening shows. You don't seem to have grasped the fact that a song gaily extolling the virtues of being smacked about for sexlolz is not really daytime radio fodder."

7. "It's not up to the BBC to decide what its audience can and can't listen to."

8. "So what do you want? 'S&M' played back to back on CBeebies? Perhaps Katie Waissel's gran could turn up on Blue Peter with a strap-on and sys­tem­at­ic­ally bum her way through a queue of soldiers while her grand­daugh­ter sings a medley of Rihanna hits in the background."

10. "Well yes, but firstly perhaps it's sur­pris­ing thing is that they are not censored, not that 'S&M' is censored, and secondly they are rarely so explicit. There is, usually, at least some sort of metaphor involved."

11. "Rihanna says that the song is about scandal and the media though, so it's not even about S&M."

13. "But Rihanna says it's about scandal and the media and has been quoted saying 'I don't think of it in a sexual way … I'm thinking meta­phor­ic­ally', and she knows what she's talking about because she sings the song. Look, here she is talking about it on MTV."

14. "Well it's nice that she thinks that but it's sort of bollocks isn't it. Surely it's more the case that a) she's made that up as an way of somehow jus­ti­fy­ing the song to herself and now believes her own lie, b) she knows exactly what it's all about and is trying to pull off a tongue-in-cheek, faux-coy 'who me?' move in an attempt to make sure her song is still played on the radio, or c) the whole 'it's a metaphor' thing is how she was sold the song when the people who wrote it gave it to her and she unques­tion­ingly went 'oh alright then' while everyone else went 'bloody hell she's fallen for it'. Hopefully it's b)."

15. "Why are you being so snobbish about people not writing their own songs?"

16. "No that's not the point at all, the point is that Rihanna has either invented or been fed a load of utter horseshit when it comes to explain­ing away what is very clearly a song that is expli­citly, trans­par­ently and undeni­ably supposed to be seen as being about sad­o­mas­ochism. It seems com­pletely ridicu­lous to release a song called 'S&M' with lyrics about being excited by chains and whips and to then start wailing about how unfair it is when people think it's about sex. Can't everyone just be honest about how this is exactly what they expected to happen, and exactly what they wanted to happen?"

17. "You seem to be sug­gest­ing that this is some sort of a publicity stunt aimed at getting people talking about the song."

Get ready to be inspired and uplifted