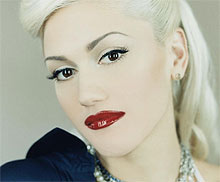 Gwen Stefani is actually going to release one of the good songs from her album!!11!

So far, Gwen has done 'a complete Rudebox' with 'The Sweet Escape' — releasing a novelty single to launch the campaign then following it up with a slightly better but non­ethe­less quite dull second single. In Stefani's case the second single was (listen to it again with this in mind) something which seven years ago would probably have found itself on a Steps b‑side.

So well done Gwen for seeing sense once it's already too late to turn the whole thing around.

The video's a bit boring though.