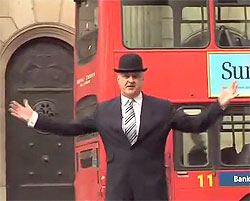 We hate the way his character swamps the channel in such a super­cili­ous post­mod­ern pseudo inverse "tellybox" irony, with its mindless "we're showing a load of old rubbish, let's take the piss out of it so nobody can accuse us of showing a load of old rubbish" mentality. It's Miquita snottily laughing at an in-joke with an off screen runner, but with a man shouting.

Here's an idea, E4 — if you think your pro­grammes are rubbish, don't show them. Don't take the piss out of the viewers who do enjoy these shows. Don't do the "so bad it's good" thing, don't do the "we're above all this really" thing. Just tell us what time the programme's on and piss off.

ANYWAY in the spirit of doing stuff for cash, Peter Dickson has now made a POP RECORD.

It's about the recession.

It's called 'What A Bunch Of Bankers'.

What's great about this song isn't just the clever wordplay — 'bankers' sounds a bit like 'wankers' — but the fact that tens of thousands of people are unem­ployed (LOL) and will no doubt be cheered up by this jolly ditty. Well done, everybody.

A peculiar way to start the day, courtesy of Hammarin & Robin

The Popjustice photography evening class is open for business