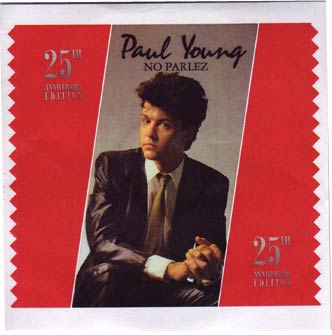 This is the 25th anniversary reissue of an album. To evaluate its relevance we have asked a 25-year-old what she thinks of it. Here's what she said:

"It looks very dated but I suppose that is the point. The fonts are very 80s. I like his suit and his hair. What does Paul Young mean to me? I don't know. It probably makes me think of my mum. Oh actually I do know his music but if I heard it I wouldn't know it was him. Well his songs are obviously well known so if I heard them I'd recognise them without knowing who it was by. I'm looking at his songs now — 'Wherever I Lay My Hat', I know that one. And 'Everytime You Go Away'. And that's probably about it. I don't know. Is that very ignorant? "