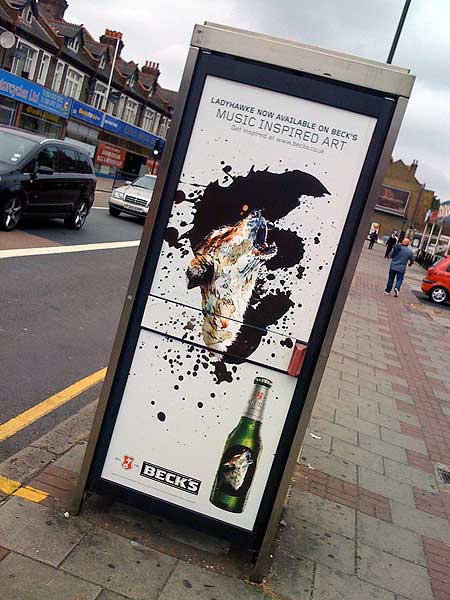 and as you get a little closer it turns out to be a Ladyhawke advert­ise­ment as well, and you start to think, "amazing, she'll probably get some money for that which will make up for all the record sales business", and then you think…

A. Actually she probably hasn't got very much money at all for it, if some money went her way as a result of this it probably all got swallowed up by other things, and you
actually wouldn't be surprised if money in fact changed hands in the
opposite direction because things like this are often a little bit more
com­plic­ated than they at first seem, and the more musicians come to rely on revenue from this sort of thing the more over a barrel they are and the less they'll end up getting paid.

B. The first reaction, that ad money makes up for lost music revenues, makes it seem as if it is somehow 'alright' that Ladyhawke probably won't make very much money from her music, which totally ignores any concept of value in art, which in turn is bollocks.

C. Still it's all great for profile, isn't it. Ladyhawke will certainly enjoy buying food with that profile.

…or certainly things along those lines. And then you notice the small pile of vomit and you think, 'amazing. Well done, The 21st Century'.