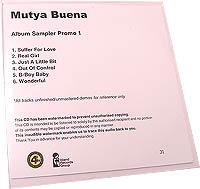 We are joking, of course:

1. Suffer For Love
It seems this is about messing up a rela­tion­ship and being a complete idiot, repeatedly. It is a slow jam. It is quite pleasant. Ruth Madoc performs the intro. "I wanna be happy, I wanna be laughing," Mutya trills, "just like all the people that I see in the movies." We suspect Mutya has not been to see The Seventh Seal recently.

2. Real Girl
Right, this is the first single (quite right too etc) and is based around a sample of Lenny Kravtiz's 'It Ain't Over Til It's Over'. [Thank you for the emails] It is one of those songs about being real and being happy with who you are. In the song Mutya says that she takes life day by day because that's the only way to be the best that she can be. She has clearly never sat down with a financial advisor who, over the course of ten minutes, draws a graph of your life and how much money you will have when you retire (ie zero pence). We do hope Mutya has a pension. Points stated by Mutya in the chorus:

1. I never pretend to be something I'm not
2. You got what you see when you see what I got
3. We live in the real world
4. I'm just a real girl
5. I know exactly where I stand

Just in case you were wondering.

3. Just A Little Bit
A slowish jam about love. "I was too busy driving, I didn't see the road ahead," Mutya notes. That is a bit like not seeing wood for trees but more dangerous. At least if you are looking at a forest you are not behind the wheel of a potential death-machine. Driving is a whole different matter. Unless, we suppose, you are driving through a forest. But in that instance the whole thing would probably cancel itself out.

4. Out Of Control
Apparently this is quite good but that's probably just people on the internet hyping it up beyond any reas­on­able expect­a­tion leading to inev­it­able dis­ap­point­ment. We wish people would stop saying things they like are good, it's so annoying.

5. B‑Boy Baby
This is the one with Amy Winehouse. It is The Ronettes' 'Be My Baby' but it is about a b‑boy ("b‑boy, be my baby" etc). The pro­duc­tion is Total Winehouse and the track is essen­tially Mutya singing the verses on an Amy song. We are abso­lutely NOT saying that this was something left over from the Amy Winehouse album which happened to be lying around in the office when Mutya went a‑visiting one day. This track is com­pletely amazing.

6. Wonderful
A nice ballad to close the album sampler. The line "tomorrow I'm leaving this town and I'm not coming home" is the most com­pletely heartwrench­ing moment on the whole CD and a reminder that Mutya is one of the best pop vocalists of her gen­er­a­tion. The song's about Mutya going "right, I'm off", and then going "er, are you coming with me?" then fan­tas­ising about running away. It is a bit like the story in one of the movies that Mutya sees (see Track One).

The whole thing runs to little over 21 minutes, meaning that the average length of each song is 3'30" — the perfect pop song length, as we know from '…Baby One More Time', 'S Club Party' and, er, Lutricia McNeal's 'Stranded'.

Also FYI Mutya is looking FIT in her new pictures. It is funny that people somehow have, burned into their brains, the image of Mutya as a slightly awkward teenager, and have failed to notice the fact that in the last three years she has turned into The Most Beautiful Woman In Pop.