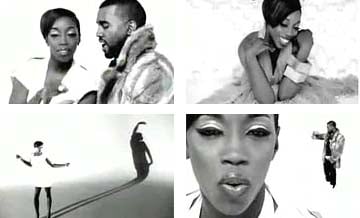 The most outspoken supporter of the new Estelle music has been Estelle herself. She has been telling a lot of people how good her new album is going to be, no doubt learning a thing or two about modesty from her new friend Kanye West, and if her new video is anything to go by the whole thing is going to be very polished. 'American Boy' features both of Estelle's famous American friends (ie Janye and John Legend), a series of attract­ive men, a fur coat and some special effects involving Estelle's shadow. It is in black and white which our impress­ive 2:1 in Media Studies tells us means that it is classy 'n' soph­ist­ic­ated.

Perhaps you might like to see the video in question, and you can do just that by clicking here. Estelle scrubs up very nicely indeed. Living in America is clearly doing her the world of good. Well done Estelle.

The best one second of video you will see this week

September — 'Cry For You'