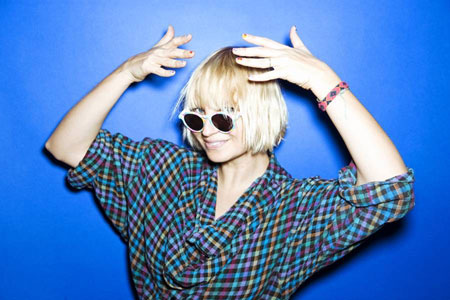 Sia's new album, 'We Are Born', is out on June 7. It's produced by Greg Kurstin (WHO IS SO INCREDIBLE IT MAKES US WEEP SLIGHTLY) and features some guitar nonsense from one of The Strokes (ABOUT WHOM WE ARE NOT FUSSED EITHER WAY).

Seeing as this is Sia's fifth album you may well already have made up your mind re the whole 'liking her' business but this might be about to change.

IF YOU ARE SOMEWHERE BETWEEN 'NOT SURE' AND 'ANTI' ON THE WHOLE 'SIA' 'DEBATE':
Good news! You are allowed to like this new album because it's not all "ooh look at me I'm Sia the kooksome pop warbler" and is, in fact, simply a very access­ible and elegant con­tem­por­ary pop album with tunes so big and rampaging you'd need a tran­quil­iser gun to take them down.

IF YOU ALREADY QUITE LIKE SIA:
Relax. 'We Are Born' is still very much a Sia album.

Anyway the important news is this:

THE FIRST SINGLE IS REALLY BRILLIANT.

It is called 'Clap Your Hands' and it is a stompy clappy triumph with a
com­plic­ated-to-sing-along-to but 100% amazing chorus bit and — attention please 'Bruce The Manager' — it is exactly
the sort of thing we would like Nadine Coyle's first solo single to
sound like. Also, in a rare instance of  common sense taking hold during the recording of a pop tune, 'Clap Your Hands' actually has handclaps in it, as you can hear in this WORLD
EXCLUSIVE CLIP of the song. (The clip is 1.5 seconds long — amazing.)

It would be something of an under­state­ment to suggest that 'Clap Your Hands' is radio friendly — hopefully we'll be able to bring you a longer clip 'quite soon'.

Elsewhere on the album: opening track 'The Fight' is a bit undu­lat­ing and low-slung and has a shouty chant of "OH YES WE STAND TOGETHER"; 'Stop Trying' has a Cureish 'Close To Me'-esque backbeat with a chorus of "we like you, this is a game already won, your time has come, stop trying". 'Cloud', meanwhile, is a big-swoopy-chorused belter, 'Oh Father' is a Madonna cover, and 'Hurting Me Now' ("you're hurting me now, you're taking me down, and you don't even notice") is VERY EXCELLENT. Across the whole album Greg Kurstin's pro­duc­tion pulls off the trick of being at once relaxed and attentive to Big Pop Hooks while on this, her fifth album, Sia herself seems to have hit something of a career high — this is a bold and cha­ris­matic album from an artist who sounds like she might now be on the verge of some rather well-earned crossover success.

This is the tracklisting.

That was the tracklisting.

(This album is properly good by the way it's not just us banging on about rubbish like we MAY OR MAY NOT have done in that past.)

File under 'not great tweets'