Some of you will already be aware that Alesha Dixon has filmed her new pop video in a lampshade shop.

As regular Popjustice viewers will know, lamp­shades of the chan­dalier­istic variety are very important in pop music. Attention to detail is crucial these days.

For example, last week we went to see Stacie Orrico do a showcase at a bar in London. We didn't recognise anyone else there so they must have been 'radio and TV' or something. The singing was alright, although it was acoustic — but what really let it all down was THIS. 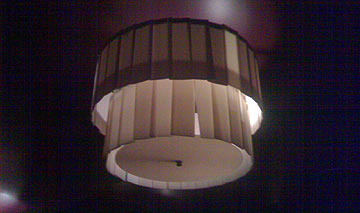 WHAT THE HELL IS THAT!!?! It looks like it has been made out of envelopes. :(

Another problem with Stacie is that in spite of the fact that the new single is quite good and everything, she wore a white dress. A WHITE DRESS!!!

Alesha Dixon would not wear a white dress on an important occasion. 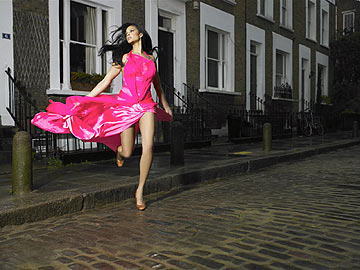 All she's done is forgotten to put the bins out and she's still made an effort. Do you know what, viewers? If pop success was measured on nothing more than lamp­shades and pink dresses — and some, not unreas­on­ably, think that it should be — then Alesha Dixon would be in the Top 10 already.

Unfortunately, amazing pop music seems to somehow cloud people's vision, so Alesha will have to wait a little longer. (ie Until August 15, which is when the 'record' is in the shops.)

PS: We like the picture of Alesha in a pink dress so much that we've 'reima­gined it' as a desktop wallpaper. You can download it for your 'computer' from our new Wallpapers section.