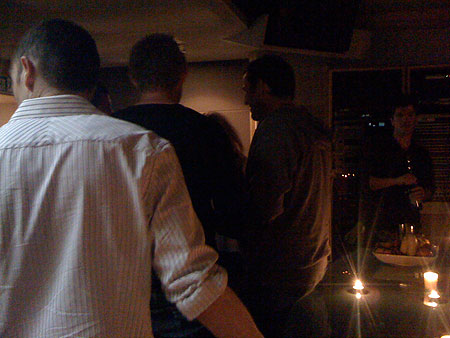 We went to listen to some tracks from the new Shakira album, 'She Wolf', last Thursday. It was at Sarm Studios (where Trevor Horn does his business — we bumped into Robbie Willliams there once then said something idiotic then walked into a door while trying to leave — not amazing) and in one of the upstairs studios we found the following:

1. About 15 hot and bothered 'gentlemen of the media'.

3. 'Filthy Mind' warbler (and now US label bigwig) Amanda Ghost, ready to give us an intro­duc­tion to the music. "This isn't going to be cheesy or syco­phantic," she said. We've been to a few playbacks like this and, to her credit, Amanda's intro was rel­at­ively uncheesy and unsy­co­phantic. Amanda was in charge of con­trolling the music, which meant pressing play on an iPod which was plugged into the expensive and elaborate mixing desk. Which seemed a bit arse-about-tit really but there you go. What was quite inter­est­ing was how Shakira, sitting at the mixing desk, was obsessed with the mix of the tracks as they went through the speakers. She'd be fidding around with knobs and faders as the songs were playing until she was happy with the sound. There was one point when one of the tracks was dis­tort­ing at a certain volume and Shakira was faced with a choice: play it loud and slightly distorted, or quiet and undis­tor­ted. She went for loud and distorted. You can probably tell quite a lot about someone from how they approach a choice like that.

We always find playbacks like this totally toe-curling. You've got someone who's just spent a couple of years recording their (hopefully) incred­ible new album sitting in front of you and your fellow 'scribes', watching for your reaction to their new songs. But how do you look like you are 'listening' to a song? How do you look like you are enjoying it? You can't just start dancing around shouting "I FUCKING LOVE THIS ONE!!!" at the top of your voice like you might do if you were, for example, at church. So naturally you avoid eye contact AT ALL COSTS and just look at the floor. Because if you are not looking at the popstar, that means they are not looking at you. But then when you do inev­it­ably look up — because obviously you're in a room with A POPSTAR so you've got to look at her — she chooses that precise moment to look at YOU and it turns into a stare-out com­pet­i­tion. Panic sets in. You don't want to imme­di­ately look away because that would admit that you felt 'caught out' looking at her, implying that there was something bad about the way in which you were doing the looking. But nor do you want to carry on looking — because at this point you are just staring at each other and that would be a bit freaky. But you do just carry on staring at each other. It is like you are suffering a severe electric shock — you want someone to throw a chair at you from across the room to jolt you out of it. But no chair comes. And then Shakira is the one to break the Stare Exchange Of Horror and look somewhere else. Which means it's YOU who is the ter­ri­fy­ing stalker because YOU are still looking at Shakira. And while you wonder whether Shakira will summon security to have you escorted from the venue, you realise that through­out the terrible, terrible stare debacle, you didn't once look like you were listening to the music. There was no head nodding or toe tapping. You were basically just staring at Shakira. LIKE A KILLER.

And then the song ends and someone from the label goes "WOO AMAZING SHAKIRA THAT WAS SO AMAZING".

After five songs, the playback is finished and everybody gets a bit embar­rassed and then some 'drinks' arrive and everybody 'loosens up'. Except nobody really loosens up. What happens is that Shakira does a meet and greet with all the journ­al­ists and radio people. She probably does this in most of the 'major ter­rit­or­ies' she visits. It must be incred­ibly tedious. Suddenly all these media people become com­pet­i­tion winners; they queue up (see photo, above) and are intro­duced to Shakira, who says some very specific com­pli­ment­ary things to each person ALMOST AS IF SHE HAS BEEN BRIEFED and has her picture taken with some of them. Watching the photo bit happen is totally fist-gnawingly embar­rass­ing. And then it is all over. 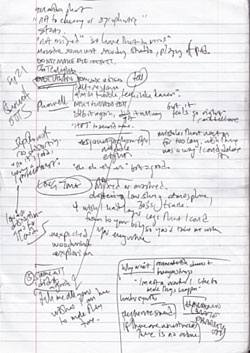 We made some notes about the songs, repro­duced here (right) in loving detail. As you can see they are a total mess and are bordering on illegible.

'Did It Again'
This is a Pharrell co-write/co-pro­duc­tion and is BRILLIANT. It doesn't really sound very Pharrell-ish. It is probably more brilliant than 'She Wolf', actually. It should be the next single. The chorus goes "I did it again, I got it all wrong, but it feels so right".

'Long Time'
A low-slung sort of affair. "I wish I had longer legs that I could fasten to your body so you'd take me with you every­where." *Glasses steam up*

Another song whose name we didn't get
Can't remember how this one went.

This is probably quite a sloppy com­par­ison but the 'She Wolf' album does have shades of Nelly Furtado's rein­ven­tion a few years ago — it's not quite as extreme and it doesn't jettison the artist's core values quite as fiercely as 'Loose' did, but there's a similar sort of vibe. (If we use the word 'vibe' like that again please come round and hit us in the head.) What's important about the tracks from 'She Wolf' that we heard last week is that they're clearly — unmis­take­ably — Shakira tunes, but they also find Shakira pulling herself in slightly different dir­ec­tions which, this far into her career, is an important factor. The fact that they're dir­ec­tions both creative and com­mer­cial is even more exciting. Hurrah.

Is this the actual sleeve for Lady Gaga's 'The Fame: Monster'?