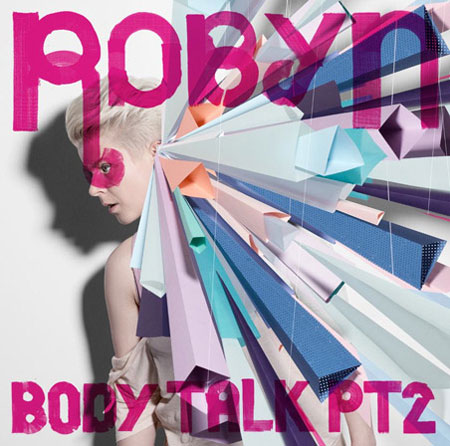 Well, after a few days of living with the album we can report that the news is this:

» It feels like a different album to 'Body Talk PT1', although it pulls off similar tricks. It's like someone telling you a story you've heard before while wearing a different hat to keep it interesting.

» It's not as strong as its pre­de­cessor but it's far stronger than it at first seems — the songs feels like they're more confident and less desperate to please on first listen, which we suppose makes sense because 'Body Talk PT1' did the proper re-intro­duc­tion business and 'Body Talk PT3' will be doing the selling-around-Christmas gruntwork, so 'Body Talk PT2' can relax a little.

» In terms of a brief track by track 'In My Eyes' and 'Include Me Out' both feel like an affec­tion­ate updated throwback to Robyn's 'Keep This Fire Burning'-era song­writ­ing, the reswizzled 'Hang With Me' fills this album's tears-on-the-dance­floor emotronic high­spir­ited down­heartened gloompop quota, 'Love Kills' is an upbeat wibbly affair, 'We Dance To The Beat' is a bottom-heavy, tune-agnostic club track, 'Criminal Intent' is a 'Fembots'-esque romp, 'U Should Know Better' is the rather frenetic Snoop Dogg col­lab­or­a­tion which to these ears doesn't quite work as well as it should, and 'Indestructible' is a classic Robyn uberbal­lad destined, we suspect, to reappear on 'Body Talk PT3' in a different form.

You're probably already starting to think about your 'Best Of Body Talk' playlists — well, we'll be adding 'Include Me Out', 'Hang With Me', 'Love Kills' and 'Indestructible' to ours, bringing the running total to ten tracks. Add four more from 'Body Talk PT3' (if the third install­ment is indeed a brand new selection of eight songs) and we'll have a cata­clys­mic­ally brilliant 14-track album. Hurrah.