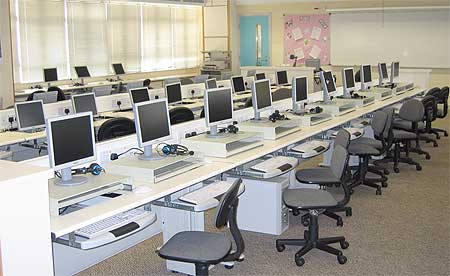 Services like Spotify pay a little bit of money to labels and artists every time a song is played.

Record labels should set up huge rooms full of computers pro­grammed to play their artists' songs on repeat forever.

They should also set up a scheme where they pay people — music fans or not — to listen to their songs. If you had 1000 people whose computers each listened to 140 songs each night while
they were in bed, at 0.25p per track that would be £350 per night, or £127,750
per year. That's not loads of money, but it's enough to keep a few people in jobs, and it's based on only one thousand people getting involved.

If just one in five students in the UK took this scheme up that would pull in £51,100,000. Universal Music could then donate half of that — that's twenty five million pounds — to British higher education, and they'd still have £25m left over. That's enough money left over to employ more than 700 people at £35K a year. Alternatively, they'd present it as a com­pet­i­tion across all uni­ver­sit­ies in the UK — the 25 uni­ver­sit­ies with the highest col­lect­ive play counts would each receive a £1m cheque (for libraries or whatever), and the com­pet­i­tion element would make the play counts even higher. If the idea of teamwork didn't work out, how about this: leave your computer on overnight, playing a specific playlist of songs, and you're entered into a lottery to have your tuition fees paid off for that year.

We haven't even factored in the idea of computers playing Spotify alongside YouTube, Last.fm etc, and even if royalty rates are 25% of 0.25p per play there's still money to be had.

There is NO FLAW to this plan. Right?

EDIT: We didn't mention labels paying artists or musicians — under our new regime artists and musicians and song­writers will actually pay the record label to release their music, bringing in yet more revenue. We will cover this another day.

Birds on a wire