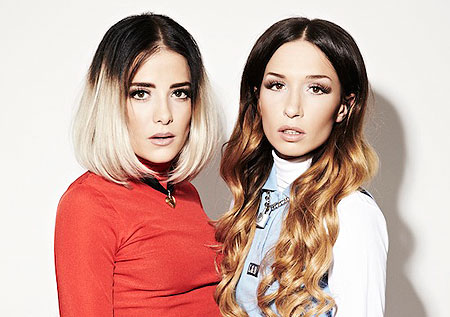 Rebecca & Fiona's debut album was one of 2011's big obses­sions at Popjustice HQ so we are VERY PLEASED INDEED that the Swedish DJ / pro­duc­tion / pop­warb­ling duo are going to be globally enormous in 2012.

They've given us the first look at the video for their new single 'Dance' and it's a bit of a spooky one but there are some male models in it even­tu­ally meaning that by the end everyone is 100% worth looking at, so it's worth enduring the moments of terror.

If you haven't come across Rebecca & Fiona yet you are in for a treat. They make smart, punchy and slightly arty modern elec­tronic pop, so if you like stuff like Robyn and Marina and Fever Ray you will probably find that they're up your street. They're already a platinum-selling act in Sweden, where they're also the faces of Adidas, recently won a Grammy for Best Dance Act, and have their own TV show.

'We Are Girls' is a good showcase of the sort of thing they do.

This one, 'Jane Doe', is amazing too — the video's a Nicki Minaj-meets-iamami­whoami sort of 'affair'.

Anyway the plan for the rest of 2012 is to make everyone outside Sweden go 'oh this is quite good you know' so Rebecca & Fiona are currently on tour in the States with more global dates and bits and bobs to be announced in due course.