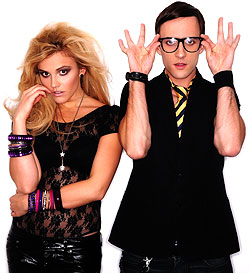 A: Because pop is a calling not a lifestyle choice and both Sean and Sarah (for it is they) have unfin­ished business in the all-warbling mostly-dancing enter­tain­ment 'arena'.

For this reason they have been busily at work on their second album. We've heard some good bits of their more recent work — the album's due in November and the duo have worked with Topham & Twigg, Anders
Hansson, Tony Nilsson, Pete
Hammond, Ian Curnow and Georgie Dennis.

Before all that the lead single is out at the end of August. It's called 'Shine On Forever (Photo Frame)' — AN AMAZING TITLE FOR A POP SONG — and was written by Sean and Sarah along with ex-PWL chap John Myers.

They'll be per­form­ing it for the first time this weekend, and here's a clip.

Did you spot the 'Don't Stop Believin''-esque moment? We hope so, it's about as subtle as Danny Dyer on a stag do.

If you'd like to see Same Difference perform this song live it's fair to say they're probably coming to a Pontin's near you this summer — full tour dates here.

Robyn — Dancing On My Own