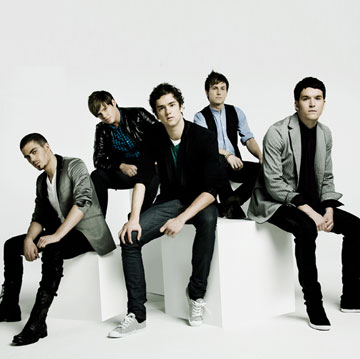 So here's the deal: Avenue, the band who got kicked off X Factor for being too good (or something), have had a slight lineup change, have hooked up with the Sugababes' man­age­ment, and are signed to Island Records.

In a 'keeping it old literally school' fashion they're currently on a schools tour and their debut single 'Last Goodbye' (which you can hear either as today's Song Of The Day or on their official site) is out at the end of August. The single has the title of a ballad but the chorus of a boybandy stomper. Their other songs are synthy and modern and v good (very very good in fact — V V Brown is one of the people who's been writing for them) and one of the songs, possibly the second single, sounds like — and is as good as — the sort of thing Five (as opposed to, say, Westlife) would have released in 2008.

Every two or three years one of the major labels tries to launch a new boyband and the last three attempts — Triple 8, V and 365 — have failed, although in each case the blame can be put on sub­stand­ard material and that's less of a concern for Avenue. But as time goes by and memories of the late 1990s become ever more distant, it's strange to think that right now there is a gen­er­a­tion of teenagers who have no recol­lec­tion of a suc­cess­ful British proper all-singing all-dancing mostly-fit boyband. Put it this way — if you're twelve you might just about be able to recall the arse-end of Blue. Not being able to remember the g(l)ory days of Code Red is not neces­sar­ily a bad thing, however.

Whether or not the boyband 'formula' is right for 2008 remains to be seen but Avenue (and their songs) look likely to give it a fair go. And one thing remains true: teenagers will always need to have a wank.

All that remains is for us to give each member of Avenue a nickname.

Left to right:
» Avenue Round For Dinner
» I'm Not Avenue Coming In Here And Giving It All That
» Avenue For Between 150–200 People With Late Licence
» 999 Letsby Avenue
» Ross

Don't all come 'Roisin' (Murphy) at once

Does anyone want ten copies of the Freemasons album?