Guest referee:
Rob Fitzpatrick — Professor of Philosophy at the University of Spotify

“Beyoncé is a kind lady, isn’t she? “I want to give you all a little gift,” she trills, as she launches — with a pecu­li­arly wobbly sort of gumption — into Arise, O Compatriots, Nigeria’s national anthem (since 1978, which means it’s only three years older than Queen Bey). As gifts go, this is up there with an ill-fitting jumper, or a £5 Amazon voucher. You smile politely, say thanks and, y’know, appre­ci­ate the thought (such as it was), but it’s not exactly a game changer. Break the track down and what do you have? The sort of twonkly piano that an old lady with an ear-trumpet plays while the col­lec­tion plate goes round a half-empty church and Bey-Bey giving it lungs over the top. And that’s it. Will anyone ever listen to it more than once (apart from me, I’ve listened to it eight times now)? No. Are you going to wake up whistling it? No. Does it make you feel #emosh? No. Conclusion: not the finest NA in the tour­na­ment. "That was for y’all!" Beyoncé gushes as the track ter­min­ates itself. Thanks! You shouldn’t have.”

“Authored in 1813 by Vicente López y Planes, an Argentinian writer, politi­cian and all-round cerveza-swilling, lady-killing, banter-merchant and smoking-hot cocksman par excel­lence (I made some of this up, sorry), Canción Patriótica means, literally, Patriotic Song. For that does-what-it-says-on-the-sheet-music bril­liance alone Argentina’s NA is way out in front here. I don’t pretend to know what yer man Brandon’s quacking on about, tbh — I don’t speak German or whatever language it is they juggle with over there — but the choon is suitably stirring. Frankly, it made me want to spin a crinoline-clad uber-babe around a glit­ter­ing ball-room full of bubbles-quaffing toffs as we both laughed out loud and wit­ti­cisms fell from my lips like spittle from an over-worked bull-dog. While it’s true that I don’t want to hear this thing ever again, I enjoyed Canción Patriótica while it lasted. God bless you, Argentina, you absolute #winner, you."

Next up: Ecuador vs France and Honduras vs Switzerland

Calvin Harris has popped a new instrumental song onto the internet 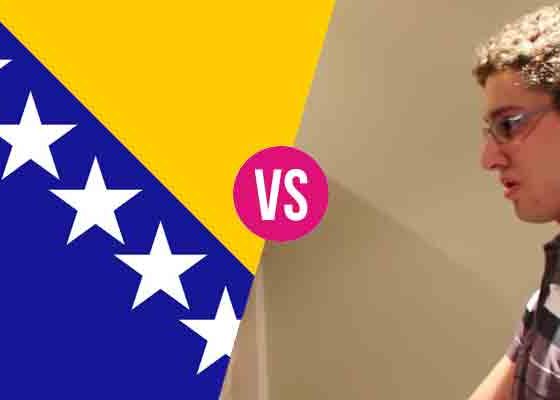 Popworldcupjustice: Bosnia and Herzegovina vs Iran