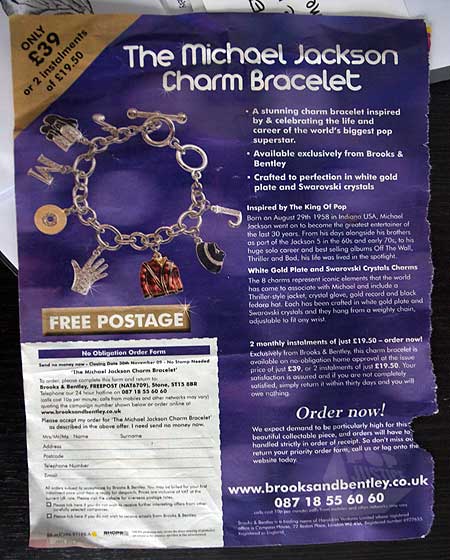 If you're looking for a way to remember the King Of Pop in two easy install­ments of £19.50, you won't find anything better than this incred­ible charm bracelet.  Each charm sym­bol­ises something that made Michael Jackson such an incred­ible enter­tainer. Clockwise from top left: a musical note for Michael Jackson was a musical recording artiste, some dancing shoes due to Michael Jackson's above average dancing abilities, an 'M' for 'Michaeljackson', a gold disc (of which Michael earned literally several), a sequinned glove (just the one — it was one of Michael Jackson's 'things'!!), a red jacket (for when Michael got cold, eg when he was 'in Moscow'), a hat (to 'keep' in the 'closet'), and a bent erection.

Is it just us or does this actually look quite good?

Basshunter press releases to prompt the raising of an eyebrow