2. The sleeve looks like this. (We don't think much of Danny's balloon.) 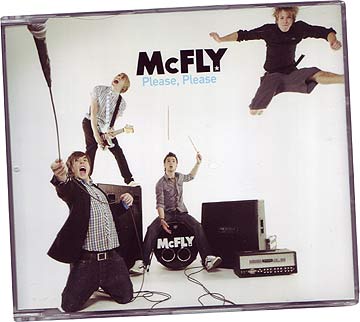 3. Look! McFly are jumping around, so they are clearly having fun like a pop group… But they also holding instru­ments, thus proving that they are musical like a proper band. It is possible to be both. In many respects this sleeve artwork rep­res­ents McFly's 'third way'.

4. The song itself sounds like proper 'old-school' McFly instead of the (according to one dis­gruntled ex-McFly fan who emailed us a couple of months ago) "weird classical shit" on the second album*.

5. But it is also a pro­gres­sion of the sound (etc) and is very good. After a couple of listens.

6. It's about Lindsay Lohan, literally the least inter­est­ing celebrity in the world today, although we do like her response to the news that McFly are claiming she did things with Harry from the band.

"I didn't date him. I didn't fancy any of the McFly boys. A friend who was with me had a crush on one of them. But musically I prefer Arctic Monkeys."

7. It sounds like The Who rewriting The Rocky Horror Show.

8. It's produced by Jason Perry and Julian Emery — the 'Matt out of Busted's solo material' dream team.

9. It's very important to note the comma in this song's title.

* The 'classical shit' was actually really good, if slightly 'brave' for a pop album.

Something strange, and it don't look good

It's made of paper and everything