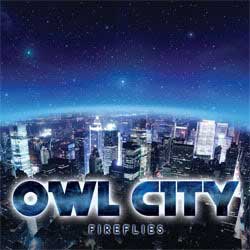 It is basically quite popular — currently sitting at Number 2 on the iTunes chart. Will it be Number One next Sunday? Well it's already Number 2 now, sort of, so does it matter where it is on Sunday? *Pens extended 'think piece' about the charts*

If you haven't come across them/him yet, Owl City are/is a sort of Fisher Price Frankmusik and is a great altern­at­ive for people who find Joe McElderry's music a bit aggressive.

We had an Owl City song as Song Of The Day last summer. Like 'Fireflies' it sort of worked better in the summer but in these cold January months perhaps what people really want is a ray of sunsh(Get on with it — Ed)

The song mentions "ten million fireflies". That's 100 times as many as in The Magnetic Fields' '100,000 Fireflies', despite the song only being half as good, although it does pull off the sur­pris­ing feat of being three times as twee.

It's also about one millionth as good as Alexandra Burke's mighty 'Broken Heels', which is also out today, although it's been 'out' for ages anyway as it's on the album, so its 'outness' today isn't quite as acute as the outness of the Owl City single. *Pens extended 'think piece' about the single format*

From the 'God help us if there's a war' file…