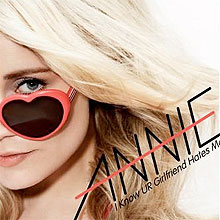 » 'I Know Ur Girlfriend Hates Me' is finally released today — news which might come as a surprise to the vast majority of UK music buyers who have never heard of the song or, for that matter, Annie.

» At some point someone — perhaps Annie — made the decision that the 'your' in the title should be written as 'ur'. What could be the reason? Trying to get 'the kids' on board? Homage to Prince, whose 'Kiss' (appar­ently) inspired the track? Something else? We may never know.

» It is produced by Richard X. It sounds a bit like one of the other songs Annie and Richard X recorded together. By 'a bit like' we mean 'the same as'.

» The b‑side, 'Danny, Danny', is literally not very good at all.

» A couple of the remixes are quite interesting.

» Still, a couple of the remixes are quite boring.

» There are three other songs on Annie's new 'Don't Stop' album which would have made better first singles than 'I Know Ur Girlfriend Hates Me'.

» We're not sure what the Protractor Of Doom would have to say about the single sleeve, but we fear its analysis might not be wholly positive.

Lady Ga Ga and some ladies in their pants: TV gold

Quite good video accompanies most pointless cover version of all time