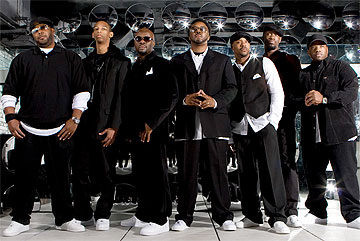 It seems Naturally 7's Phil Collins cover 'Feel It (In The Air Tonight)' isn't exactly new, but it arrived in the post the other day so we assume it is getting some sort of 'push' here in the UK thanks to the gorilla* advert.

Naturally we have thrown away the press release which accom­pan­ied the band's single and album so we can't be much more use you to on that front.

What we can tell you is that we were also about to chuck out the CD as well, having listened to 'Feel it (In The Air Tonight)' once and given it a 6/10 rating in our heads. It was only while perusing the credits on the album's sleeve — one must never chuck out an R&B album without first examining its sleevenotes for details of comedic samples — that we came across this:

"All songs performed without the use of instru­ments. All musical sounds (including drums) are created by the human voice."

Not bad, we suppose.

We might be the last people on the planet to have encountered 'Naturally 7' (even Lionel bloody Richie got their before us) but we think this is quite good, if only in a Britain's Got Talent sort of way. Or America's Got Talent. (They're American.) Or Germany's Got Talent. (Their record deal is in Germany)