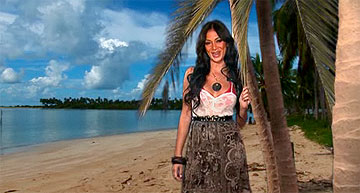 Nicole Scherzinger, an exotic beauty who embodies the same enchant­ment and viva­cious­ness of Brazil, was a natural pick for the song's remake. The new song "Rio (Caress Brazilian Mix)" is bursting with the energy and colorful sounds of Brazil. "Rio (Caress Brazilian Mix)" was produced by Ron Fair and JR Rotem with addi­tional pro­duc­tion and mix by Ben H. Allen. First released in 1982, "Rio" climbed the charts to become a top twenty hit on both sides of the Atlantic, with the video becoming an MTV staple.

"Brazil is all about smooth moves, vivacious sounds and beautiful skin," says Scherzinger. "That's why I'm thrilled to be recording such a fun, Brazilian remake of my favorite Duran Duran song for Caress. Just like the new Caress Brazilian body wash, it's sexy, spirited and will inspire women to unleash the enchant­ment of Brazil."

Unleashing the enchant­ment of Brazil
Just like Nicole, women every­where can unleash their Brazilian spirit with Caress® for a chance to win a trip to Brazil. Visit caressbrazilian.com to download the new hot song, "Rio (Caress Brazilian Mix)" and submit a video (or create one online) that shows how to live out the charm, viva­cious­ness and spirit of the country. Thirty finalists will win exciting prizes such as: spa treat­ments, iPods with Brazilian music or a year supply of Caress® *. To help get everyone into the Brazilian spirit, they can also request free samples of the new Caress® Brazilian Exotic Oil Infusions body wash at the website (while supplies last).

About Nicole from The Pussycat Dolls:
Nicole Scherzinger is the lead singer for The Pussycat Dolls, whose album PCD has sold over 7 million copies worldwide, spawned five hit singles and a Grammy nom­in­a­tion. She has been involved with per­form­ing arts through singing, acting and dancing from a very young age and is currently in the studio, prepping for the next Pussycat Dolls album, coming later this year.

About Duran Duran:
Duran Duran is an award-winning English rock band with over 70 million records sold, 18 American hit singles, 30 UK top 30 tunes, and a global presence which guar­an­tees them huge concert audiences on 5 con­tin­ents. The band was formed in Birmingham, England in 1978 by key­board­ist Nick Rhodes and bassist John Taylor and boast hit singles including "Rio," "Hungry Like the Wolf," "(Reach Up For The) Sunrise" and "Save a Prayer." They have also created hit movie tunes for "9 ½ Weeks" and "A View to Kill" (was the only Bond theme tune to make it to #1). Throughout their career, they have col­lab­or­ated with musical greats such as Grace Jones, Sting, Guns N' Roses, Kylie Minogue, Justin Timberlake and many more.

About Caress:
Caress®, the beauty brand known for products that leave skin silky soft and smooth, offers an excep­tional variety of mois­tur­iz­ing beauty bars and body washes that embrace the playful side of beauty. A global Unilever brand and trusted name for more than 30 years, Caress® is the fastest growing women's body wash in the market. Caress is available in food, drug, mass outlet, club and value stores nation­wide. Visit www.caressskin.com for more information.

About Unilever:
Unilever's mission is to add vitality to life. We meet everyday needs for nutrition, hygiene and personal care with brands that help people feel good, look good and get more out of life. Each day, around the world, consumers make 160 million decisions to purchase Unilever products.

Madonna playback 'mayhem' (ie not mayhem at all)

It's not her name but it is her video