Popjustice on 'Baby Love' by Nicole Scherzinger a few weeks back: "It's a real crock of shit".

It's a quote that didn't end up on any of the press releases but we were perhaps a little hasty in writing off the Pussycat Dolls lady's 'first' single so dis­missively. It's just a bit under­whelm­ing, that's all.

We saw her sing 'Baby Love' last night at her first solo London gig and it was a very bizarre show indeed. It was a tie-in with the launch of a new video camera which all seemed very strange indeed since everyone else was there to discuss 'hi-defin­i­tion' and technical spe­cific­a­tions and seemed a bit non­plussed by the American woman singing songs over their conversations.

Here is a nice picture of the evening. 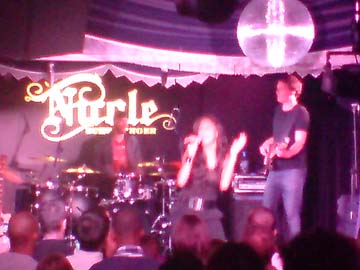 When she did manage to bellow over the din, Nicole Scherzinger's solo songs are all pretty good. She seems to have scrubbed US flop single 'Whatever You Like' out of existence because she left that one off the list but she did 'Supervillian', which is still a great song and should probably have been her first single. She also did new tracks 'Happily Ever After', 'Who's Gonna Love Me' and the Gary Lightbody track 'Just Say Yes'. All of these we preferred to 'Baby Love', which she finished her little show with.

The whole evening was a bit odd really, partly because of the dis­in­ter­ested people who were only there in the hope of a free video camera but also because Nicole was not the ready-made diva we expected. Like the 'High School Musical' cast, Nicole gives the impres­sion of having being grown in a lab by exec­ut­ives to perform a pre-determ­ined role perfectly, but in terms of 'stage persona' simply seems a little timid and lost, shuffling uncer­tainly around the stage with one hand in her pocket.

The other hand was not giving a high five.

You can't go wrong with a helicopter