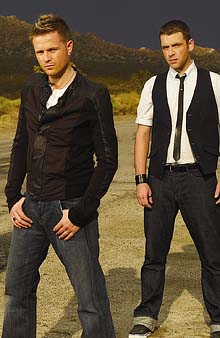 Well, sort of, but at the same time  perhaps not. We inter­viewed Mark and Nicky very recently and they were both very funny and very aware of exactly what people think of them.

Here is what they had to tell us about their new album, the dreadful 'Westlife Go To The Movies' record Simon Cowell was pushing them to record and the terror of a chart face-off with the Spice Girls…

Hello Westlife. What do you think people think about you?
Mark: People think stools, suits and cover versions.
Nicky: From the outside in — actually from the inside out as well – I can see why people think some of the things they do about Westlife. The black suits and everything, it's as exciting as watching paint dry, but when you get into Westlife, when you know us per­son­ally, when you come to see our live shows it's the complete opposite.

What is left for Westlife to achieve?
Mark: There are def­in­itely things that we want to achieve per­son­ally and as a band — the main thing is to win over the Popjustice viewers but I don't think we're ever going to achieve that.
Nicky: We felt recently that we haven’t been at our best. Songs like 'Flying Without Wings' and 'World Of Our Own' really enabled us to become a long serving pop band and this year we put our foot down with the label and said that we wanted to get back to where we were, making great pop songs and that's what we did this album.

Why were you releasing music that wasn't your best?
Nicky: We've got a formula with Westlife and we've got Simon Cowell behind us. He knows what the public wants to a certain extent, but what we've learned to do with Simon is to force a com­prom­ise and we've done that on this album. Simon didn't want us to make an original pop album, Simon and Sony/BMG wanted us to make a 'Westlife Go To The Movies' album which would have been cover songs like 'Take My Breath Away' from Top Gun but that really wasn't up our street. We would rather have knocked the whole fucking thing on the head than record that album. I hope we get three or four singles off this album too, I hope we don't just stick with one or two before Christmas. This is a good album.

Is the album going to win over non-Westlife fans?
Mark: It's made for Westlife fans. It's not made for people who already hate Westlife and we're not making albums to try and convince fans of trendy pop music that we're cool. We make pop music for our fans.
Nicky: It's safe to say there are people we are never going to win over.
Mark: It's not electro pop, it's not trendy pop, it is com­mer­cial Westlife pop music.

So this is not Westlife's 'Rudebox'?
Mark: We def­in­itely went down a certain road for a while but this album and we're not saying the new album is going to be credible or crit­ic­ally acclaimed, we never ever will be, but it's def­in­itely going back to pop music.
Nicky: We've got a good thing going here. We're four lads in our twenties, we sing well together so let's make pop music. Mark is right, we've made one too many cover versions, last year's 'Love' album probably sold more off the title than it did from the quality of the songs, even though we'll stand up for our vocals 100%. People will always expect us to do a love album and that's why this year we had to change things a little bit, because otherwise there'd be no point in us con­tinu­ing. It was time for us to make a really fucking great pop album.

Would the only way for you to become more famous be for you to split and then announce a comeback tour six months later?
Nicky: There's nothing like a bit of nostalgia and a reunion, Take That were in a win-win situation, they had no idea how big or small it was going to be but hats off to those boys, they have come back and they have brought back something that has been missing for years.
Mark: When we made our swing album a few years ago we took two years between pop albums but the feeling coming back to pop music and the reaction from the fans was so obvious that it was good for us not to do a pop album that year. That's another thing that works against us is that we release an album every single year – if we didn't release so close together then maybe people wouldn't see it is the same old thing over and over. The whole comeback thing has become a bit of a trend… When Take That did it it was a new thing and now it's just cliché to come back.

What's going on with this ridicu­lous Westlife and Spice Girls chart battle?
Mark: We were fans of the Spice Girls at the start but this thing could get really out of hand and I hope it doesn't. Things like this can be fun, a bit tongue in cheek and a bit of a laugh but for some reason I don't think those five girls – one of them in par­tic­u­lar – are going to see the fun side to it. I hope that we can contain ourselves and not lash out because I heard something recently that really wound me up and I've been biting my tongue since then.
Nicky: It would be great to have a normal chart battle with the girls, we were fans of them back in the day when we were young and they were massive.
Mark: They need to come back with a 'Patience' and if they do then it will be huge.
Nicky: I don't know any girl that has patience…

It would take a brave four men to go up against those five.
Nicky: Ah, but we'll have our stools for back up…

Thank you very much Nicky and Mark Westlife.