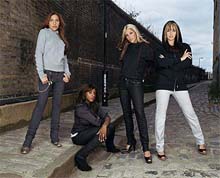 We have added some new songs to The Chart Of Truth. The fact that Christmas is nearly here does not mean everyone has downed tools and stopped making good songs.

Timbaland'Give It To Me'
(It's from his new album and it features Nelly Furtado and Justin Timberlake.)

All Saints
'Fundamental' / 'On & On' / 'In It To Win It'
(The three best songs from their new album that aren't the single.)

The Gossip'Standing In The Way Of Control' (Tronic Youth mix)
(A very brilliant remix of a very brilliant song. Unfortunately, if the Beth so-called fucking 'Ditto' here's‑who-I-am piece in the NME is anything to go by, The Gossip are fronted by the most self-con­sciously 'indie', deriv­at­ive, humour­less and try-hard front­per­son of all time.)

Original Cast
'Let In The Sunlight' / 'Life'.
(The two best songs by an amazing unsigned pop band who many people might be confusing with an indie band due to the way they look and the way they sound.)

P Diddy feat Christina
'Tell Me'
(Worth an entry if only for getting Christina to ditch the 1940s for the ten minutes it took to film the video.)

Lil' Chris
'Gettin' Enough'
(There will be more Lil' Chris songs going on The Chart Of Truth as soon as we dig out our copy of the album and remember which ones were our favourites.)

Snow Patrol feat. Martha Wainwright
'Set The Fire To The Third Bar'
(Anyone who does not like this song is WRONG.)

So that's that for the time being.

The End Of Pop