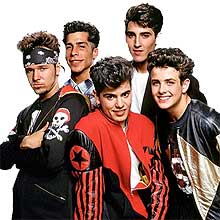 » New Kids On The Block invented the concept of the modern boyband, paving the way for Take That and Freefaller.

» Danny Wood was in New Kids — long before the multi-platinum success
of Upper Street. Other band members included Jordan Knight, Marky
Mark's brother, The Prototype Mark Owen and Jon With The Pointy Face. You can see in the picture here that Jon was the odd one out, as all other band members had their hair pointing upwards, although Jon now has the last laugh because by wearing his hair 'down' he effect­ively invented emo.

» The first New Kids album flopped but they started selling records when Joey from the band became fit.

» Although the band sold over 70m albums you won't hear many of their hits these days — this is because without exception every single one of their releases was abso­lutely shit. This is 'Step By Step'.

That, ladies and gentlemen, was a Number Two hit single.

» After the band split, Jordan Knight released a really good single called 'Give It To You'.

Tragically, the video featured Jordan wearing a woolly jumper under a leather jacket and his career failed to take off as a direct result.

» When they were bored of being popular, New Kids On The Block sacked their manager, changed their name to NKOTB because they were adult artistes and decided to make Serious Grown Up Music. This Serious Grown Up Music took the form of a song called 'Dirty Dawg', a number so unut­ter­ably terrible that every member of the band was sent into space as a pun­ish­ment, only being allowed to return to earth for appear­ances on low rent reality TV shows.

» Now they are back from outer space. We suspect the return of New Kids may have slightly more impact in the States than in the UK. Then again who can predict the bizarre fancies of the British record buying public.

And that, viewers, is all you need to know about New Kids On The Block.

The Newsdump, Jan 29 08: from Leona's new album to Sophie's hundreds and thousands