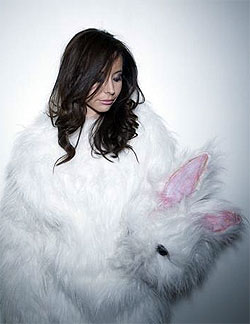 1. Dollface
She used to be in quite-good ladytrio Silhouettes (mentioned here once or twice) and now she is by herself doing some solo warbling that's shaping up to be rather good. Keep an eye on www.myspace.com/dollfacesmusic for further developments.

2. Mini Viva
Their next single is the best wistfully upbeat tune Xenomania have come up with since 'Call The Shots'.

3. Jessie J
Have you, like us, been emailed this YouTube clip of Jessie sitting on the floor shouting about one hundred million times? We're not sure if the 'tip offs' are genuine or part of some tedious viral exercise but it doesn't matter because the big news here is that Jessie is one of the writers respons­ible for Miley Cyrus' 'Party In The USA', aka one of humankind's greatest artistic achieve­ments of the last 500 years.

4. Nerina Pallot
She's wearing a rabbit costume on the cover of her new album. The new album itself (out next week) happens to be really good. She's also been doing some stuff with Kylie but that's neither here nor there really.

5. The Sound Of Arrows
Their single, 'Into The Clouds' is released TODAY. (This is the iTunes link if you consider life to be slightly too short to be dicking around with 'vinyl'.) If you haven't heard/seen it yet there's a Fear Of Tigers remix with its own stu­pendous video.

We're not sure about you but we're already looking into 'Innerspace' style mini­atur­isa­tion exper­i­ments in the hope that one day we might be able to actually live inside The Sound Of Arrows. Amazing.

666. 'John & Edward'
You'll have to excuse our language here readers but the sooner these two cunts get off the tele­vi­sion the better.

How's the future looking for JLS?