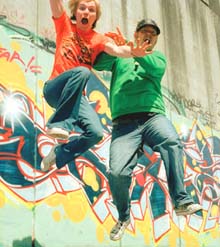 This will be of interest to people who have heard the first Junior Senior album. For those of you who haven't, COME BACK. We are about to tell you about one of the best pop albums of 2007.

Despite the new album 'Hey Hey Mr Mr Yo Yo' being 19 tracks long, the shouting has been kept to a minimum this time around, thanks to Junior Senior recording songs which sound like people other than Junior Senior. People like Abba and Michael Jackson. You may be familiar with their work.

Here is a quick run through of what you can expect from the album should it ever be released in the UK instead of just America where it came out this week.

'U And Me': it sounds like Abba.
Actually, it sounds like Erasure covering Abba in the sense that not only is the song itself quite amazing but the pro­duc­tion is ridicu­lous, amazing and a com­pletely gay. This track has been stuck at the end of the second disc on the album, which is odd but we are sure either Junior or Senior knows what they are up to.

'I Like Music': it sounds like The Jackson 5.
Michael Jackson is known for liking a lot of things. One of those things is music. Junior Senior and Michael Jackson are not so different. 'I Like Music' doesn't sound like 'Scream' or 'Earth Song' very much.

'Take My Time': it sounds like The B‑52s.
What is funny about this sounding like The B‑52s is that Junior Senior don't sing on this one. The two old ladies from The B‑52s do. There is a video for this one and everyone involved is rep­res­en­ted in car­toonu­lar fashion.

'Stranded On An Island Alone': it sounds like the White Stripes.
Jo Whiley would like this one. It is on their MySpace page. (FYI: MySpace is an old fashioned, pre-Facebook com­mu­nic­a­tion tool like the pigeons and telegrams.)

'UR A Girl': it sounds like The Beach Boys.
To be quite honest so does a lot of the album, since Junior Senior's sound by defin­i­tion is like a noisy The Beach Boys.

On top of all this 'I Can't Sing, I Can't Dance But I'd Do Anything…' sounds like The Go! Team and 'Can I Get Get Get' sounds like 'Steal My Sunshine' by Len. So as well as making songs which sound like artists everyone likes, Junior Senior are also making songs which sound like artists nobody likes. A novel approach.  On the downside, after 11 or so amazing tracks, it does all tend to wear off a little. It is also harder than you might think to find pho­to­graphs of Junior Senior which make them look like they are not planning to murder you while you sleep. :(

Why is it amazing that Gabrielle is back?

Once more with feeling