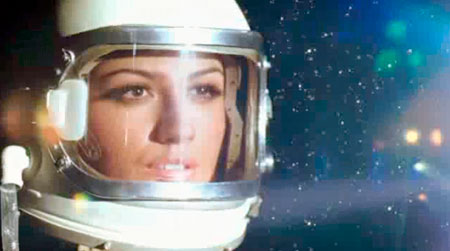 Over the past few weeks we've become increas­ingly obsessed with the new Gabriella Cilmi single 'Woman On A Mission'. It's a synthy guitary slightly new wave-esque pop song…

…and now it's a Popjustice Song Of The Day there's been some early feedback from forum members.

"This is the kind of stuff Kelly Clarkson should be doing."

"I think this will do well. Its catchy as hell and very, very instant."

"I hated Gabriella Cilmi before because I worked in the co-op and they used Warm This Winter for their Christmas campaign and played it on the shop radio between EVERY song. (Extended waffle) But yes, this song is very good indeed."

"Her voice sounds amazing on this record. A+"

Wait until you see the video — along with the glisten­ing helmet pictured above there's assorted spacea­ged­ness and about 500 costume changes, as well as a brilliant piece of cho­reo­graphy which accom­pan­ies "I am a woman" with a dramatic cleavage reveal. And you don't get that from 'The Drums', do you.

Gabriella Cilmi — 'Woman On A Mission'