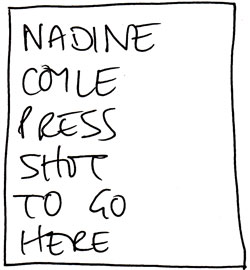 The run-up to the release of Nadine Coyle's solo album, solo single, solo ANYTHING has been so drawn-out and fraught with panic that it makes The Wanted's now legendary single campaign look like a whimsical three-day jaunt.

We heard one of her demos several months ago and it was — we'll be honest here readers — bloody boring, but under the expert guidance of manager 'Big Apple Bruce' she's been in enough studios with enough producers and enough writers for enough time to have either acci­dent­ally sung the entire works of Shakespeare or, hopefully, taken her musical endeav­ours in a rather different direction.

In fact, as if by magic (or 'Nadgic' — we're talking about Nadine here hahahaha) here's some inform­a­tion from the Popjustice forums.

[I recently] got to hear 3 of Nadines tracks [and] all 3 of the tracks are potential singles and supris­ingly VERY good. I was a bit of a GA fan, but up until now had no interest in any of Nadines solo plans.

One track was something about a person being insa­ti­able and it was quite catchy. The 2nd track was possibly called 'Changed / Change Me' and it was my favourite. The 3rd was a William  Orbit track and it had elements of 'Untouchable' moments. It was a bit more ballady than the other 2, but it was definetly not a slow love song. It was quite nice but the 2nd track was the one that I could visualise hearing on the radio.

The expected? Very big vocals from Nadine. The unex­pec­ted for me? I think I will actually really like solo Nadine. She is pretty damn good.

Yes, single goes to radio in September and album out in November.

If your name was Laura Comfort, what would you call your album?