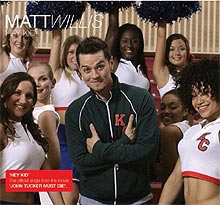 Matt Willis has a new single out soon. It is called 'Hey Kid' and is the one we told you about in January which sounds like Def Leppard. It is com­pletely brilliant.

Unfortunately, Matt made a very terrible video to go with it. In the video, Matt leads a group of people around London. Oranges are thrown in the air. Everyone in the video looks com­pletely like someone from a music video.

Fortunately, Matt has now made a SECOND video for 'Hey Kid', in which he is a high school 'coach' (trans­la­tion: PE teacher) frol­lick­ing with cheerleaders.

The new video is almost as amazing as the song, ie very.

What with this and the whole Paris Hilton episode, we think remaking videos until they are actually watchable should be a new 'thing' for popstars.

Then perhaps once they've got their head around remaking terrible videos, they can start remaking terrible songs, too. Imagine that! Popstars not just making do with the crap they manage to come up with first time, and actually learning from their mistakes! IT COULD HAPPEN.