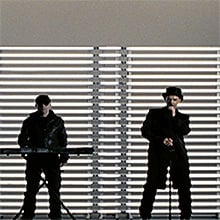 Right then. So you've sent in your questions about the new Pet Shop Boys single 'Love Etc' and we've done our best to answer most of them.

Q: Is the new single more rock or electronic?
A: Electronic.

Q: Does Neil do any rapping?
A: The bit in the middle eight comes closest, but it's with a softer, more singy sort of tone than something like 'Left To My Own Devices'.

Q: Are the lyrics about boredom or being bored with love?
A: No.

Q: Has it got Disco Potential?
A: Yes.

Q: Does the song lend itself to more 'Very'-era dressing up shenanigans?
A: No more or less than any of the 'Very'-era singles did.

Q: I have noted that '3:34' is actually quite a rare good song length, with '3:33' and '3:35' bringing up at least double the amount of songs in iTunes. However, included in my '3:34' catalogue are 'Back Seat Driver' by Kim Wilde and "Teardrops" by Lovestation. Both of these are equal to or greater than 'very good'. My question is: "Is the new Pet Shop Boys track equal to or greater than (KW) x (L), if we factor in the power of Kim's pre-Nicola miserable expres­sion and Lovestation's cheap but floor-friendly cover?"
A: Yes.

Q: Does it contain sirens/fog horns/air horns or the like?
No.

Q: Is it struc­tured more like the tra­di­tional 'Verse/Chorus/Verse/Chorus/Middle Eight/Chorus/Big Finish' or more like a Xenomania-style 'First Chorus/Verse/Bridge/First Chorus/Second Chorus/Bridge/Verse/Surprise!/Second Chorus/Fade Out on Bridge'?
A: It goes like this: intro / "you need more" chanting / verse which sounds sus­pi­ciously like a bridge / chorus / "you need more" chanting plus post-chorus chorus bit / sort of instru­mental break portion / "too much of everything is never enough" segment / beat drops out for second verse or bridge or whatever it is / chorus / "you need more" plus post-chorus thing / middle eight / Chorus to fade / fin.

Q: Do the lyrics tell a story?
A:
Not really, they're more of a 'Love Comes Quickly' / 'Before' / 'You've Got To Start Somewhere'-style instance of Neil doing his benefit-of-exper­i­ence 'thing'. So it's written from the outside going "hello, I am Neil Tennant, this is what I have dis­covered in my life and perhaps you would do well to listen to my top tips on love etc if you are inter­ested in a kiss and a cuddle".

Q: Do you think it will sell well outside their core fanbase?
A: Combined with the Brits per­form­ance it could do. It's the most Radio One-friendly track they've done in a while.

Q: Does it feature an orchestra?
A: No.

Q: Does it have pathos, drama or euphoria?
A: No.

Q: Does it contain witty obser­va­tional lyrics?
A: Yes.

Q: Does it have an under­ly­ing sadness?
A: No, unless you count the implicit sadness that people are mater­i­al­istic in their view of love etc.

Q: Will the fans like it?
A: Let's be honest, the fans will always find something to moan about.

Q: I heard a rumour that it sounds like the White Stripes doing PSB. Please say it’s not so.
A: It's not so.

Q: When will it recieve it's first radio play?
A: Don't know.

Q: Which of the Pet Shops Boys previous material does it sound closest to?
A: 'Flamboyant' and 'DJ Culture' and 'Go West', but it doesn't really sound like any of those.

Q: Do you know any info about the new album apart from the release date and that Love Etc.. is on it?
A: It will probably be reas­on­ably listenable.

Q: Is it better than ‘Flamboyant’?
A: The general opinion will probably say yes, although we like 'Flamboyant' more than most people so what do we know.

Q: Does it have Johnny Marr on guitar?
A: Don't know.

Q: What do you think about the com­mer­cial pos­sib­il­it­ies of this new single (Love, etc)?, could it be a massive hit?, a real classic like: West End Girls, Suburbia or It's A S0in?
A: No, but only because it doesn't really sound like it's trying to do what those songs did.

Q: Do you think this song is better than any other song from the previous album Fundamental?.
A: No.

Q: Do you think many young people could give a chance to Pet Shop Boys with this new song?
A: No.

Q: Is this song an elec­tronic ‘stomper’, fours to the floor beats and power chords?
A: No.

Q: Does it have Patsy Kensit on backing vocals?
A: No.

Q: Does 'different' in your descrip­tion mean it's got lots of guitars?
A: No.

Q: How would you describe its style? Is it fast, slow, or somewhere in-between? Is it a dance track, a ballad, a rock song, hip-hop, techno, swing — what?
A: It's somewhere in between. Perhaps it is an elec­troswing pop record. It will fit in quite well alongside the Christina/Katy 'New Wave Of 2004' revival.

Q: Exactly how many seconds intro before the vocals?
A: Fifteen seconds before Neil's first proper vocal.

Q: Any backing vocals?
A: Not under­neath Neil's vocals, but there's the stuff in the chorus mentioned above plus some "you need more you need more" chanting.

Q: Whats the most classic Neil Tennant line in it?
A: "It's tough getting on in the world when the sun doesn't shine and a boy needs a girl."

Q: Radio 3 Playlist possibility?
A: No.

Q: Any sign of a Chris vocal?
A: No, but perhaps in the chorus rabble.

Q: In a scale of Pet Shop Boys Videos, from the garish bright primary = colours of Go West to the miserable black & white rat infested­ness of = Home and dry, how colourful would the video be (remember, the answer = must be a title of an existing video, not a colour or a shade).
'Red Letter Day'.

Q: Which 2008 X factor con­test­ant would sing it on PSB week?
Diana Vickers. From previous years, The Unconventionals.

Q: Will it end the credit crunch?
Yes.

Q: Are there any vocal sounds on it which are not actually words, or at = least english words?
No.

Q: Bearing in mind you've only heard the single and not the full album = what track position do you think it would end up on the album?
Track 3.

Q: If the song was a face, whose face would it be?
Tom Cruise's.

Q: We´re talking about an elec­tronic piece of music? or synthpop, just pure 'pop', or something different?
It's dark, slightly blippy pitch­bendy elec­tronic pop with synths in it. No donks have been put on this record.

Q: I'd like to know what is the main theme of the song?
If you wanna be my lover, you've got to get with my general mindset (and prefer­ably be fit).

Q: Or which album would it be better suited for?
'Pop Art'.

Q: Any homo references?
Yes (see "it's tough getting on in the world when the sun doesn't shine and a boy needs a girl" line).

Q: It doesn't have that annoying Vocoder thing they sometimes do, does it?
A: No.

One thing we would like to add to all of the above is that it's a very unex­pec­ted sort of song and the first time you hear it you probably won't know what to make of what you're hearing. Despite a big and very clear chorus it's the first Pet Shop Boys single in ages that takes a few listens before it clicks but, in classic Xenomania fashion, when you do get your ahead around it the whole thing sounds totally sensible. We're very excited about the album…