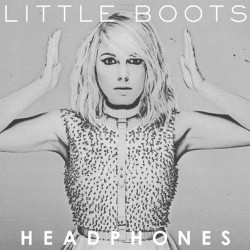 There will, at some point in the next five months, come a point when it is necessary for Little Boots to — and we don't wish to baffle or mystify with music biz ter­min­o­logy here — shit or get off the pot.

She'll decide whether she's a Kylie or a Saint Etienne, a Marina or a Hot Chip.

Yes we know the idea is that she's sort of all that at once with a bit of roman­ti­cised early-80s disco thrown in, but that's easier said that done so we're going to have to insist that a decision is made.

Once she's decided, it will be a lot easier for the rest of us to figure out what's going on. Maybe she's already decided and we just haven't picked up no the hints yet. Obviously musical artistes will probably say "hey man don't pigeon­hole me it's killing the vibezzzz" but basically, as fans, we just need a bit of context. It's not as if we can't listen to Little Boots without screaming "OH CHRIST CAN SOMEONE JUST TELL US HOW TO ENJOY THIS MUSIC" but it would be good to know where she is heading. For instance Victoria was def­in­itely a Kylie sort of popstar first time round, or that was the way she was presented, anyway. This time, she seems to be setting things up to be more of a Hot Chip. Maybe we're just reading too much into the way her songs are kind of appearing out of nowhere.

Anyway until this is all decided, we're rather enjoying Victoria's low-key releases, even if we're a bit concerned that she may have sac­ri­ficed her chance to make A Big Comeback and could therefore be ruling out the Top 10 option.

Last month's 'Every Night I Say A Prayer' is followed today by the punchy belter 'Headphones', which is a song about listening to your Generic Portable Music Playing Device when one finds oneself in a dis­cotheque whose music policy is rubbish. By extension we suppose it is also a song about being prepared to look like a tit in public, being anti­so­cial, the need to exert more authority when it comes to deciding where you and your friends go out, and perhaps even the need to get some new friends. It sounds quite a lot like Blondie actually. We bet Debbie Harry would never end up at a bloody dubstep night listening to 'Call Me Maybe' on her iPod. Food for thought there, Victoria. Food for thought.

Anyway 'Headphones' is out on iTunes today and we would have made it a Big Song but there's no way of embedding it so there you go.

will.i.am wants his spinny chair back next year