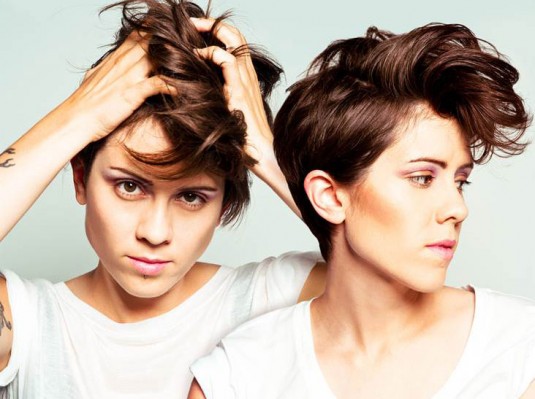 As the songs have gradually been appearing online we have been going increas­ingly mental about the prospect of Tegan & Sara's new album 'Heartthrob', and we've listened to little else since the full album arrived at Popjustice HQ last week.

When you put the CD into iTunes it shows up under the genre 'Indie Rock' but 'Heartthrob' is 100% solid pop music that's as instant as it is amazing, and it's hard to see how it won't end the year somewhere in 2013's Top 5 albums. Particular high­lights are 'Closer', 'Goodbye Goodbye', 'I Was A Fool', 'I'm Not Your Hero', 'Drove Me Wild', 'How Come You Don't Want Me', 'I Couldn't Be Your Friend', 'Love They Say', 'Now I'm All Messed Up' and 'Shock To Your System'.

But don't — as they say — just take our word for it. Here's a stream of the whole bloody thing!

'Note': This is a 'UK exclusive' — cheers ladies — but that's not much use if you are elsewhere. Rolling Stone are streaming it to some other countries so give that a go if you like.

The album's pre-orderable at iTunes and we suggest you purchase it right now.

Seriously this is such a tre­mend­ous album.

A thing about a song