This compact disc arrived in the post the other day. It contains Avril Lavigne's new song 'Girlfriend' which, we have dis­covered through some clinical booze trials, is either a complete racket or com­pletely mind­blow­ing depending on how drunk you are.

The first thing we noticed was the box. 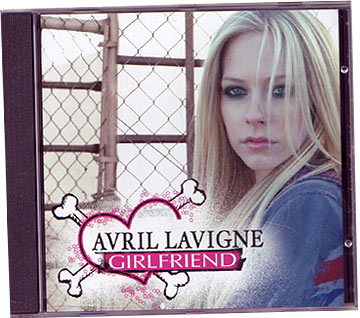 Look at the strip on the left hand side. A grey plastic inlay tray?!! What year is it?? They might as well send the new single out on bloody wax cylinder! Unbelievable.

The best thing about the CD, though, is track number two. 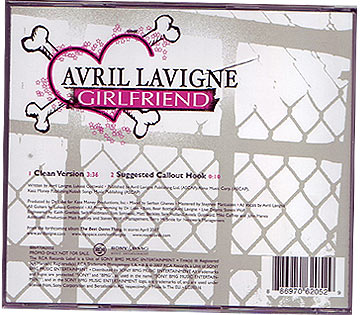 It's called 'Suggested Callout Hook', it's basically just the chorus of 'Girlfriend', and it lasts for only ten seconds. TEN SECONDS! Imagine if all songs were simply ten seconds of chorus.

Think of the benefits.

- More songs on your iPod.

- Gigs over in three minutes.

This is def­in­itely the way forward. ARE YOU LISTENING, THE MUSIC INDUSTRY?!???