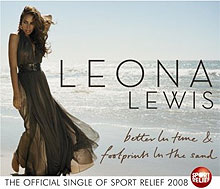 Well, it's all kicking off for the next Leona Lewis single, a double a‑side of 'Better In Time' (amazing) and 'Footprints In The Sand' (boring).

As you can see from the single sleeve (right) they haven't skimped on the symbolism, with Leona pictured quite literally walking along some sand and therefore leaving some FOOTPRINTS in that SAND. What you can't see is that moments after this picture was taken Leona stepped on a washed up jellyfish and the pho­toshoot ended messily with Simon Cowell pissing on the talented warbler.

What's happening in the 'Footprints In The Sand' video? Well, Radio One's website have got the exclusive and it's The Official Single Of Sport Relief 2008, so it's an emotional affair.

As you can see, so far the video has been very emotional and sad. By this point we are about two thirds of the way through the song, which means… IT'S TIME FOR A KEY CHANGE.

But how important is a key change, and how does it influence people? Let's have a look.

So there you go. Keychanges really can save lives. You can click here to watch the video in full, and click here to find out more about BBC Sport Relief. Don't forget to buy Leona's single when it comes out — profits are going to charity, and we imagine the label will also be donating a pro­por­tion of the extra money they make when the Leona album gets a sales boost from all the primetime TV coverage.