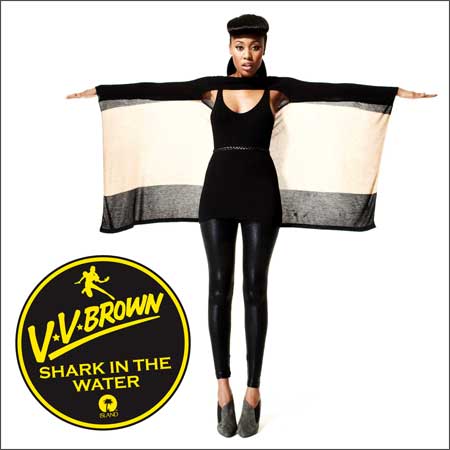 VV Brown played her next single, 'Shark In The Water', during her set at the Camden Crawl last Friday. It was the first time we'd heard the song and it sounded imme­di­ately brilliant — a rein­ter­pret­a­tion rather than a con­tinu­ation of the 'indie doo wop' schtick she's been working on over the last couple of singles and therefore a lot less sylised and a great deal more accessible.

The track's video appeared on YouTube last night. Here's what some punters on the Popjustice forums make of it.

» "It feels like a fantastic summer evening track."
» "This is delightful."
» "I've now listened to this like 6 times, on repeat."
» "Bonus points for instantness."
» "Sounds like a summer anthem."
» "Why this couldn't be a hit is beyond me."

In the interests of fairness:

Everyone is entitled to their own opinion and music appre­ci­ation is, of course, a sub­ject­ive matter, but the final commenter is clearly as wrong as wrong can be.

Anyway here's the above-mentioned video, which hasn't been put on YouTube by VV's label so might have dis­ap­peared by the time you read this.

That really is the sort of video that only a major label could make, isn't it?

What's your favourite bit of this The Enemy press release?